As The Old Vic’s bicentenary year comes to a close, BBH London has produced a short film entitled ‘New Since 1818,’ to round off the celebrations. The 90-second film, directed by Thomas Bryant from Blink Productions, presents the story, essence and attitude of The Old Vic; an independent, not-for-profit theatre in London.

The film was shot on location at The Old Vic and stars Erin Doherty who, following recent stints at the theatre in the critically acclaimed A Christmas Carol and Alan Ayckbourn’s The Divide, is soon to be seen as Princess Anne in series 3 of Netflix’s The Crown. Erin plays the sole protagonist, the 200-year-old Old Vic herself with the elixir of youth, embodying the undoubtedly female essence of the 200-year-old building as she muses over memories, social purpose and creative philosophy.

With the support of AKA, the film is the theatre’s first ever short film for cinema and will be seen in over 40 cinemas UK-wide, including Curzon, Everyman and Picturehouse. The film will also run online and across social.

The Old Vic is London’s independent theatre, a charity in receipt of no regular public subsidy. For two centuries this iconic institution has been a vital part of its local community, whilst also playing a significant role in developing the cultural landscape of the UK. Heritage organisations including The English National Opera and The National Theatre were founded by The Old Vic, and household names such as Laurence Olivier and Judi Dench even began their careers there. Throughout its history groundbreaking productions, social mobility and inclusion have remained central to its work. In celebrating this significant milestone, the theatre wanted to explore a variety of ways to engage audiences in the life of The Old Vic and this collaboration with BBH, who provided their services for free, offered an exciting opportunity to do so.

About the collaboration Kate Varah, Executive Director of The Old Vic said: ‘This year has offered a unique opportunity to celebrate the iconoclastic, creative and adventurous spirit of The Old Vic. We are so grateful to BBH for their generosity, passion and commitment in helping us to mark this milestone and we look forward to sharing this film with audiences.’

Oliver Short, Creative at BBH said: ‘The thing that struck me about The Old Vic is that whilst its 200 years old, its as young and vigorous as a new theatre in terms of what it creates. So, I wanted to embody this in a character. Enter stage left, Erin Doherty.’ 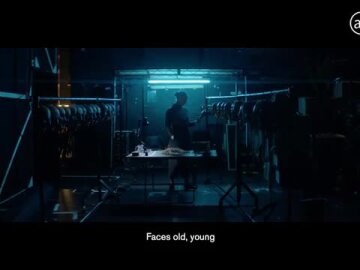